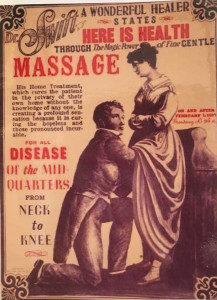 Recently I had the good fortune of getting to celebrate my birthday weekend in Cape Cod, Massachusetts. What a joy and a privilege to spend time in this lovely part of the country! So gorgeous – both the weather that we were fortunate enough to have, and the view of the lake that we were blessed to enjoy. The BEST part of the weekend though was getting to spend quality time with my polycule and family. Both my stupendous husband and awesome boyfriend were in attendance, as well as some cherished friends – who are leading members of our Loving Without Boundaries community – as well as my sister and her beau. What a blast! I still need to go through the photos, which will be fun to get to re-live all of those awesome memories. Ahhhh… maybe birthdays in our late 40s ain’t so bad afterall – not with that fun and funky bunch of revelers. Yay! I am so grateful for where I am at in my life. The hard work it took to get here just makes it that much more fulfilling. 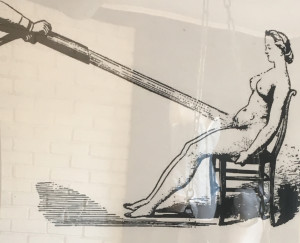 Speaking of hard work and thoughts of “you’ve come a long way, baby”, I’d like to share some fun, educational tidbits with you. On my actual birthday, we spent the day in Provincetown. I love that eclectic, beautiful and fascinating place! I have been there once before for my first gay wedding. You can read about that hilariously awesome time here. This town just has such a cool sexy vibe. Super great shopping, tasty restaurants, and incredible people watching. Yessss! I can’t wait to go back. During our explorations of the area, we of course wondered into the local sex shop (natch!), Toys of Eros. If you are wondering, no, we didn’t buy anything. This lucky girl has quite a full chest of toys already. But we had a blast talking to the store owner (a fascinating and funky woman) as well as checking out the History of Sex Museum display found at the entrance of the store. I have seen other sex museums before – both in Amsterdam post-college while I’m sure while I was high on hash brownies, and also at Great Expectations in San Francisco where my husband-to-be and I proceeded to buy $500 worth of sex toys and porn… No I am not kidding! See why I didn’t need any more toys? (wink, wink, nudge, nudge).

In ancient Greece, Hippocrates taught that almost all diseases that befell women were due to a diseased womb. He called this disease Hysteria. (Hysto is Latin for womb). His treatment for hysteria was to induce a “convulsion” that would purge the womb of disease.

This is a translation of Hippocrates’ cure for hysteria:

“Anoint the head of the womb, (yup, the clitoris) with a mixture of cinnamon myrrh and warmed olive oil. Begin rubbing in a circular motion. As the patient nears the cure, her body may stiffen, and she may cry out and grimace in pain. She will have convulsions of the lower trunk, and then sink to calm, signifying the hysteria has been cured.” (sounds like an orgasm to us!)

For over 2,000 years, from ancient Greece to the 1930s, physicians believed in Hysteria and continued treating it by “pelvic massage.”

Why did men allow doctors to touch their wives and daughters? First they didn’t know females had orgasms, and they didn’t know the clitoris existed. Only the vagina was considered sexual and off limits.

Doctors made 75% of their income by treating hysteria. But physicians complained about the difficulty of inducing “a convulsion” through pelvic massage. From a 1702 medical journal:

“All patients require different techniques with different motion speed and force. You may find your fingers and hands cramped and numb before you can induce a cure. It is a physically demanding treatment that can take over two hours with certain patients.” 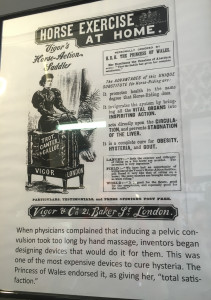 So physicians began to invent different ways to induce orgasms faster and more effectively. It began with a water hose aimed at the “pelvis.” They invented a vibrating table powered by a steam engine. They even had an indoor horseback riding machine to induce orgasms.

When electricity was wired into homes, vibrators were so popular that they were the fourth electrical appliance made for the home, followed only by the iron, toaster and sewing machine.

All the popular mainstream publications, including the New York Times and the Sears catalog, all carried advertisements for vibrators. The advertisements didn’t hide the effects of an orgasm, but they still called it a hysterical paroxysm. Quotes from advertisements:

“Your whole body will virtually tingle with the joys of living… All the keen relish, the pleasures of youth, will throb within you… quicken the pulse, invigorate your system, and bring about that delightful sensation of renewed energy necessary for a useful and happy life.”

And now, for more titillating reading (and not to be outdone by female genitalia), check out…

In order to save little boys from insanity and blindness, he developed a surgical cure. Dr. Kellogg explains the procedure in a 1929 medical journal: 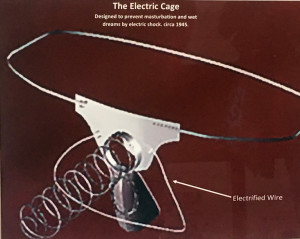 Terrified their sons and daughters would be plagued by blindness, insanity or worse, parents flocked by the thousands to get this innovative surgical treatment.

Parents that could not afford surgery purchased devices to stop their sons from having erections and nighttime emissions (wet dreams). Two popular devices used electric shocks to the penis and spikes that pierced the penile skin.