What is the Difference Between Polygamy and Polyamory? Let’s clear this up… 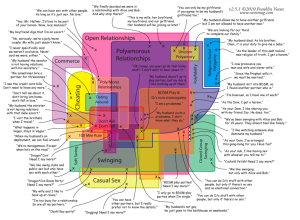 Map of Non-Monogamy created by Franklin Veaux of MoreThanTwo.com (http://tacit.livejournal.com/333842.html)

Happy Friday, you sexy beasts! Several times in the last week or so, poly-curious peeps have used the word “polygamy” with me when discussing my lifestyle and the contents of this blog, website and the Loving Without Boundaries movement. I see that there is quite a bit of confusion surrounding the words “polygamy” versus “polyamory” – the latter of which is what this blog and information here is focused on. This blog serves to educate as one of its primary functions as well as create community for us ethically non-monogamous / polyamorous folk. So I would like to take a moment to discuss and share information about the differences between these two terms to the best of my knowledge.

First, feel free to check out the awesome Map of Non-Monogamy chart here (generously created by Franklin Veaux) that shows all of the various nuances and types of open relationships including how they overlap.

Also, in cultures that practice marital monogamy, bigamy is the act of entering into a marriage with one person while still legally married to another. Bigamy is a crime in most western countries, and when it occurs in this context often neither the first nor second spouse is aware of the other. Whereas…

Polyamory – the practice, state or ability of having more than one loving relationship at the same time, with the full knowledge and consent of all partners involved; the relationships may be sexual or may not be sexual – the focus is mainly on “love” which is why the word “amore” or “love” is the root of the word – so literal translation is “many loves”.

Note that the word “marriage” is not used in the above definition of polyamory, nor is organized religion associated with polyamory.

Does this help clear it up? I did some research and will share the below as well for further clarification and learning tools. Here are some highlights of each with a link to the full article below each excerpt.

What is problematic are the various words used to define multiple partner relationships and how often they get confused.

Polygamy is the blanket term used to describe any form of multiple marriage, perhaps with the exception of bigamy, in that bigamy can occur without some partners knowing, while Polygamy generally is classified by all partners knowingly being involved in a multiple marriage.  Ergo, while we often think of polygamy as a man with multiple wives or “polygyny,” it also can include a woman with multiple husbands, or “polyandry.”

Switching over to polyamory, another blanket term, polyamory differs in that while there may be a marriage, all participants are not necessarily attempting to be involved in a form of marriage, but rather a supportive mutually agreed upon relationship.

Read the full blog post for the above excerpt here.

The below is from a blog that advocates for the right of consenting adults to share and enjoy love, sex, residence, and marriage without limits on the gender, number, or relation of participants. I thought the post brought up some interesting points…

Equality in relationship rights and marriage necessitates that consensual polyamory and polygamy not only be legalized, but protected from discrimination and persecution. Current inequality in the law is harmful. For example, in the US, it is legal for people to have a different sexual partner (or several) every day, have children with multiple other partners, and (in most places) live with multiple partners, but it isn’t legal to be married to more than one at the same time. A man can have children with five different women, but can’t be legally married to more than one of those women at the same time, even if all are agreeable. What kind of sense is that?

Some people are polyamorous as part of their identity, and can’t be monogamous no matter how much they are punished (loss of marriage, loss of money, loss of employment, bullying, etc.) As long as they are with consenting adults, why should their relationships be denied equal treatment? With full marriage equality, fewer people will enter into what is supposed to be a monogamous relationship under pressure to be in the closet, and then hurt the other person.

Recently a lovely lady JYW posted in the Polyamory forum on Facebook her excited news about the following:

Last night, my boyfriend asked my husband, if he could have my hand in marriage. After a brief man to man chat, they came out smiling together and we spent the rest of the night celebrating. I can’t explain how excited I am!!! We’re getting married this summer!!!!

When she was questioned “how that works legally” due to marrying more than one person at the same time being currently illegal, she stated so eloquently:

To clear this up… I don’t believe in involving the government in my personal life. My word means the same to me, whether I sign a paper agreement or not.

Love that! In the same FB forum, a gentlemen pointed out to me:

Note – that while marriage between more than two people is illegal in the US, MANY polycules have chosen and continue to choose to live as if they were legally married. They have ceremonies, exchange vows, have rings etc.

Thanks so much for that clarification and joining in on the conversation, my friend!

What say you? Are any of my readers here in a form of “group marriage” or living under the same roof with multiple consenting adults? Has anyone here had a “hand-fasting” or other type of commitment ceremony outside of their legal marriage? I would love to hear your thoughts on the matter as the concept of multiple committed relationships and how to honor them has always intrigued me.

Wishing you peace, love and happiness!
(and thrilling, fun sex too!) Are You Still Trying to Repress your Polyamorous Leanings?
August 23, 2021

From Queer Monogamous Breakup to Polyamorous Chosen Family?
May 10, 2021